Last week when I started posting Project Light & Lean reviews I had a posting schedule and I was sure that I would follow that schedule. Two days in…and I was already off the schedule. I was initially frustrated with myself that my plan didn’t work. How could I have fallen off of my posting schedule so soon? Should I even have committed to this project if I couldn’t even stick to the schedule I created for myself? What does this say about me? 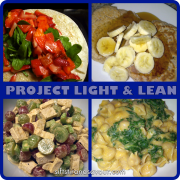 And then a moment of clarity emerged through my mental chaos. That moment of clarity said “who cares!” and with that my mind cleared. My frustration, doubts and criticism floated away. I was finally able to look at the situation and reflect on what was going on. And what was going on was I created expectations of myself that were not realistic and it resulted in me feeling negative. Isn’t it fascinating the impact expectations can have on our experiences? Me falling behind on my posting schedule doesn’t actually have any impact on whether or not I finish the project. Sure, it will likely alter the time frame but who cares! At the end of the day it’s the process of completing the project that is important, not the final outcome of the project being finished.

With all of that said, I think it’s time for more breakfast talk. Today I’m talking about the savory breakfasts from Happy Herbivore Light & Lean. Overall, I am not generally a fan of savory breakfasts. Why would I eat something savory when I could eat something sweet? Obviously that is just my taste preference. I’d eat breakfast and dessert for every meal of the day if I could without feeling completely “blah” after a day or so. I should note that I actually ate all of the savory breakfasts for either lunch or dinner. Yes, I’m cooking my way through the cookbook, but I’ve make no commitment to eating the recipes for the meal they were intended for 🙂

I did not completely follow this recipe as I was suppose to. Since I was making it for lunch I doubled the amount of steamed greens. I also used taco shells instead of corn tortilla’s because the only gluten-free corn tortilla’s that I’ve been able to find are frozen and fall apart very easily. Because of the changes that I made to the recipe I had a difficult time fitting all the fillings into the shell. Basically it was hard not to make a mess while eating but since they tasted pretty good I wasn’t bothered by the mess I made. These tacos were sweeter than I was expecting and in hindsight I could definitely enjoy these babies for breakfast. They were super quick to throw together so they would make a good weekday breakfast. My partner did not try this recipe because I made them when he was not home and to be honest they are not something I would expect him to like so I didn’t go out of my way to make them for him.

This recipe was interesting. I liked the tempeh bacon when I made a sandwich with it but I wouldn’t eat it by itself. I don’t really know how to explain it, but there was an after taste that I noticed when I ate a piece by itself that I didn’t notice when I ate it in a sandwich. My partner only had a bite of this recipe but I was surprised when he said that it wasn’t bad and that he would eat it if it were in a sandwich. I should note that I never made him a sandwich with the tempeh bacon so I have no concrete evidence that he would have eaten it. I don’t think this is a recipe I’ll be making again because it took some forethought to have the tempeh marinate for 4 hours before cooking and I wasn’t overly impressed with the recipe in general. To be fair, I have yet to find a recipe for tempeh bacon that I really like. This probably means that tempeh bacon and I are just not meant to be.

Okay, I need to start this review by saying that I do not like biscuits and gravy. It was not something that I grew up eating and not something that ever looked appealing to me. I’m sure it comes as no surprise that I did not like these biscuits. I did, however, like the gravy and I would say the meal overall was okay. Like I said, a dry biscuit is not appealing and had the gravy not been so flavourful, I probably would not have been able to finish my serving. If I liked biscuits and gravy though I think this recipe would have been fantastic. The gravy had a gentle salty flavour that paired well with the garlic that was also in the gravy. I didn’t make this recipe for my partner because I was not expecting to like it myself and figured if I didn’t like it than there was no way he would like it. Both the biscuits and gravy are not gluten-free, however, they were easily made gluten-free by substituting an all-purpose gluten-free flour for the white whole wheat flour the recipe called for. Just remember to make sure that your all-purpose blend has either xanthan gum or guar gum!

I usually like tofu scrambles and I definitely liked this one. It was very quick to make and it had a really bright flavour. The texture was different than your typical scrambled eggs because it doesn’t have that fatty taste, but this dish is so much more filling than eggs that I think even an egg lover would appreciate it. I made this tofu scramble for my partner but put it in a wrap for him to eat on the go and he really liked it. I’m learning that he’s more likely to eat something if I just hand it to him and don’t let him know what’s in it. I feel fairly confident that had I told him his wrap was filled with tofu scramble he would have turned his head. Since I told him it was a breakfast wrap though he bit into it without thinking and liked it. I’m slowly cracking his code, MUAhaha!

And with that, this post concludes the breakfast chapter in Happy Herbivore Light & Lean. In case you didn’t notice, every recipe was either naturally gluten or easily made gluten-free, awesome! Next is the Muffin & Bread’s chapter…